Quali was sponsoring the MPLS/NFV/SDN congress last week in Paris with its partner Ixia. As I was interacting with the conference attendees, it seems fairly clear that orchestration and automation will be key to enable the wider adoption of NFV and SDN technologies. It was also a great opportunity to remind folks we just won the 2017 Layer 123 NFV Network Transformation award (Best New Orchestration Solution category)

There were two main types of profiles participating in the Congress: the traditional telco service providers, mostly from Nothern Europe, APAC, and the Middle East, and some large companies in the utility and financial sector, big enough to have their own internal network transformation initiatives.

Since I also attended the conference last year, this gave me a chance to compare the types of questions or comments from the attendees stopping by our booth. In particular, I was interested to hear their thoughts about automation and the plans to put in place new network technologies such as NFV and SDN.

The net result: the audience was more educated on the positioning and values of these technologies than in the previous edition, notably the tight linkages between NFV and SDN. While some vendor choices have been made for some, implements and deployment them at scale in production remains in the very early stages.

What's in the way? Legacy infrastructure, manual processes, and a lack of automation culture are all hampering efforts to move the network infrastructure to the next generation. 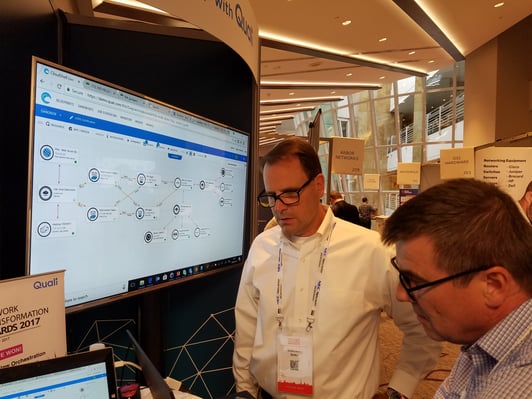 NFV Orchestration is a complex topic that tends to confuse people since it operates at multiple levels. One of the reasons behind this confusion: up until recently, most organizations in the service provider industry have had partial exposure to this type of automation (mostly at the OSS/BSS level).

Rather than one piece, NFV orchestration breaks down into several components so it would be fair to talk about "pieces". The ETSI MANO (Open Source NFV Management and Orchestration) framework has made a reasonable attempt to standardize and formalize this architecture in layers, as shown in the diagram below. 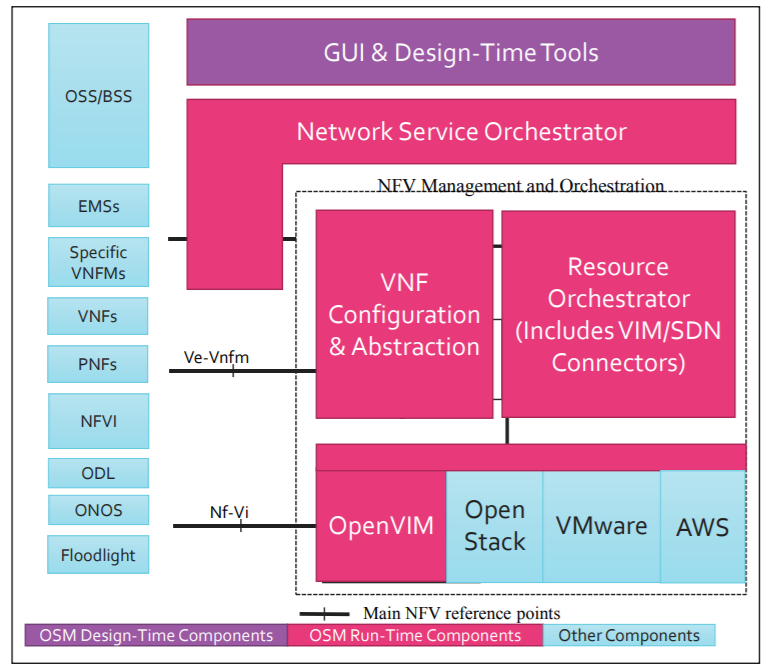 At the top level, NFV orchestrator interacts with service chaining frameworks (OSS/BSS) that provides a workflow that includes procurement and billing. a good example of a leading commercial solution is Amdocs. At the lowest level, the VIM orchestrator provides deployment on the virtual infrastructure of individual NFVs represented as virtual machines, as well as their configuration with SDN controllers. traditional cloud vendors usually play in that space: open source solutions such as Openstack and commercial products like VMware .

In between is where there is an additional layer called VNF Managers necessary to piece together the various NFV functions and deploy them into one coherent end to end architecture. This is true for both production and pre-production. This is where the CloudShell solution fits and provides the means to quickly validate NFV and SDN architectures in pre-production.

Bridging the gap between legacy networks and NFV/SDN adoption

One of the fundamental obstacles that I heard over and over during the conference was the inability to move away from legacy networks. An orchestration platform like CloudShell offers the means to do so by providing a unified view of both legacy and NFV architecture and validate the performance and security prior to production using a self-service approach.

Using a simple visual drag and drop interface, an architect can quickly model complex infrastructure environment and even include test tools such as Ixia IxLoad or BreakingPoint. These blueprint models are then published to a self-service catalog that the tester can select and deploy with a single click. Built in out of the box orchestration deploys and configures the components, including NFVs and others on the target virtual or physical infrastructure.

If for some reason you were not able to attend the conference (yes the local railways and airlines were both on strike that week), make sure you check our short video on the topic and schedule a quick technical demo to learn more.